" This is sugary-slick indie rock that is hard not to like. " Jason Broome, Chronogram

"...Jostle It!#¢ [is] smothered with enough sugar to fill the Marshmallow Fluff factory, but Robinson’s lyrics, pregnant with brainy and surreal political protest, don’t even begin to register until the third or fourth spin." Peter Aaron Roll Magazine

"Von Robinson’s brand of “agit-pop” works well because it is exactly that: packing enough biting social commentary to agitate the most apathetic listeners and enough multi-layered pop melody—reminiscent of Elvis Costello, The Zombies or Beach Boys—to placate any pop-rock fan. Sharp, disparaging lyrics could put the less-politically minded off, yet Robinson’s delivery is light enough of songs like “Briana” to keep his bold sentiments from feeling preachy. Unlike the in-your-face political rhetoric of some punk bands or folk musicians, Robinson omits specific references to events or politicians, dealing instead in the subtleties and personal observations. If there is a way to spoon-feed a loaded message to listeners, it would be through the sort of lyrical ambiguities and euphonic songs found on Jostle It!"  Bill Dvorak The Deli Magazine

"Heading in the direction of The 88’s and Fountain’s Of Wayne uber-pop, VR&HOU are as catchy as it comes...like Elliot Smith during a sunny day..." Justin Scro, Cashbox Magazine

NEW ALBUM!
Twelve yet to be smash hits! 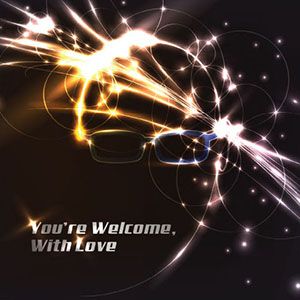 "Genuinely talented and intelligent, with a firm grasp of the technicalities of song writing and a real knack for fresh, sunny indie pop. Few bands nowadays seem to realise the importance of good melodies and harmonies, but Von Robinson have it down to a tee. You could make comparisons with American indie bands such as The Shins or The Decemberists ; however there is a hidden gem in the lyrics...This is where [VR&HOU] shine, they manage to combine lyrics which make you think with a style that makes you feel chirpy and happy. It is refreshing and unique, and I eagerly await the arrival of a full length album. If any band deserves to be signed, it’s Von Robinson and His Own Universe, as they provide the antidote to shallow, samey pop music of today." Monkeyfeesh Music

“Von Robinson is best described as a musical force of nature with a mission, and this album is his first salvo. "Satellites and Totem Poles" is not just a great melodic slice of genius, but a scathing political commentary as well… I am just drooling in anticipation of a full length album. He is a really accessible artist and I hope you buy his album and encourage him to make more great music!” Powerpopaholic

"No doubt the cogniscenti could name several dozen artists who seamlessly combine “powerpop” with “ulism,” but this is one of the few I’ve come across who pull it off so well. [VR&HOU] combine irresistible lyricism with thought-provoking lyrics (check the latter here). Thought-provoking powerpop. What a concept." Powerpopulist

"The universe of NYC’s Von Robinson can be compared to a poppy field: looks and sounds cheerfully packed full of bright, red petals from afar, but when you think about poppies main use, illegal substances, life’s not so rosy. So too with VR—the music on this EP packs a melody-driven, multi-harmony punch, yet it’s armed with lyrics like “write it off as business or charity if we happen to discuss God or poverty,” that make the message more than a sarcastic subtext. Intelligent, fun and crisp, with vocals that recall Elvis Costello and a boundless energy with a bit of Flaming Lips’ grandeur. Impressive pop subversives!" Frank Stein, Sentimentalist Magazine

"On their debut EP, Von Robinson & His Own Universe have crafted a political outcry album like no other in that it’s total sugar pop, a la Elvis Costello. The arrangements and vocals are sunny and pleasant and the songs are weighty, but don’t press down on you with urgency. For an album that contains lyrics like “The leaders went to rape the planet” and “If you see love as a non-renewable resource/You’ll understand greed”, it’s amazing how POPPY this record is. It almost fools you, it really does. No doubt, though, that this is socially conscious material. It isn’t all press hype. Von Robinson has something to say… There’s a message here and a brilliant packaging made perfect for singing along to. It’s not propaganda, but it’s also propaganda at its best." Mitch Michaels, 411mania

"It sounds like pop. It reads like poetry. This is a smart recording. It is worth understanding the message of the artist. Maybe something like this is needed in the world of pop to get the message across to those who espouse commercial music. This is such heavy social commentary delivered with a surprisingly subtle hand." Neo-Zine

"These sleek, harmonious pop rockers bridge the gap (very neatly I must say), between 80's New Wave and current pop punk bands like Bowling for Soup, or The Raconteurs." Pop Vulture

"Mellifluous and honey-tongued." The Daily Commoner

"VR gives us more words per beat than most singer-songwriters, so if quality isn't your thing, Robinson delivers. Quantitatively, a cut above the rest."